Minister Heather Humphreys was in Carlow today (22nd July) for a number of projects, the final visit of the day being to the Borris Viaduct for the official Opening.

The project is located in the Blackstairs Mountain Region in Borris, Co Carlow. The Borris Railway Viaduct was a key part of the walking and cycling trails infrastructure in the region however the Viaduct was closed by Carlow County Council in 2018 due to safety concerns.

The Borris Railway Viaduct project has redeveloped and upgraded the Viaduct to make it safer and more accessible to visitors and to link Borris town to its amenities. The facility can be used for walking and cycling. The completed project has delivered a new amenity and tourism facility for the Borris area.

Speaking at the opening of the Borris Viaduct the Minister said:

“It is wonderful to be able to officially open the Borris Railway Viaduct project, which received €654,820 funding under my Department’s Rural Regeneration and Development Fund. 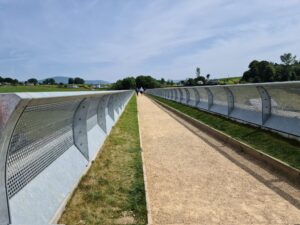 “The Viaduct is now safer and more accessible to visitors and links Borris town to its other amenities. The facility can be used for walking and cycling and is a major tourist attraction for the Borris area, one of the key tourism centres in the south of the county and a gateway to the Blackstairs Mountain region.”

“Supporting ambitious projects that create new amenities for local people and create tourism potential are key to realising the goals of Our Rural Future, the Government’s plan to revitalise rural Ireland.

“I want to congratulate the local authority and its partners; Borris Tidy Towns, Fáilte Ireland, Carlow Tourism and County Carlow Chamber of Commerce CLG, they have really delivered for their community.”

“A bridge to the past and a link to the Future” is how Cathaoirleach of Carlow County Council Cllr. Fintan Phelan described the project. He continued to say:

“I’d personally like to thank the Minister and her officials for the support of this project and for the project team and local contractors who worked with us to develop this project. In re-opening this Viaduct you can view the sights and landscape that our ancestors would have enjoyed as they travelled by train enroute to Bagenalstown or Palace East in Wexford.”

We use cookies on our website to give you the most relevant experience by remembering your preferences and repeat visits. By clicking “Accept”, you consent to the use of ALL the cookies.
Cookie settingsACCEPT
Manage consent

This website uses cookies to improve your experience while you navigate through the website. Out of these, the cookies that are categorized as necessary are stored on your browser as they are essential for the working of basic functionalities of the website. We also use third-party cookies that help us analyze and understand how you use this website. These cookies will be stored in your browser only with your consent. You also have the option to opt-out of these cookies. But opting out of some of these cookies may affect your browsing experience.
Necessary Always Enabled
Necessary cookies are absolutely essential for the website to function properly. These cookies ensure basic functionalities and security features of the website, anonymously.
Functional
Functional cookies help to perform certain functionalities like sharing the content of the website on social media platforms, collect feedbacks, and other third-party features.
Performance
Performance cookies are used to understand and analyze the key performance indexes of the website which helps in delivering a better user experience for the visitors.
Analytics
Analytical cookies are used to understand how visitors interact with the website. These cookies help provide information on metrics the number of visitors, bounce rate, traffic source, etc.
Advertisement
Advertisement cookies are used to provide visitors with relevant ads and marketing campaigns. These cookies track visitors across websites and collect information to provide customized ads.
Others
Other uncategorized cookies are those that are being analyzed and have not been classified into a category as yet.
SAVE & ACCEPT